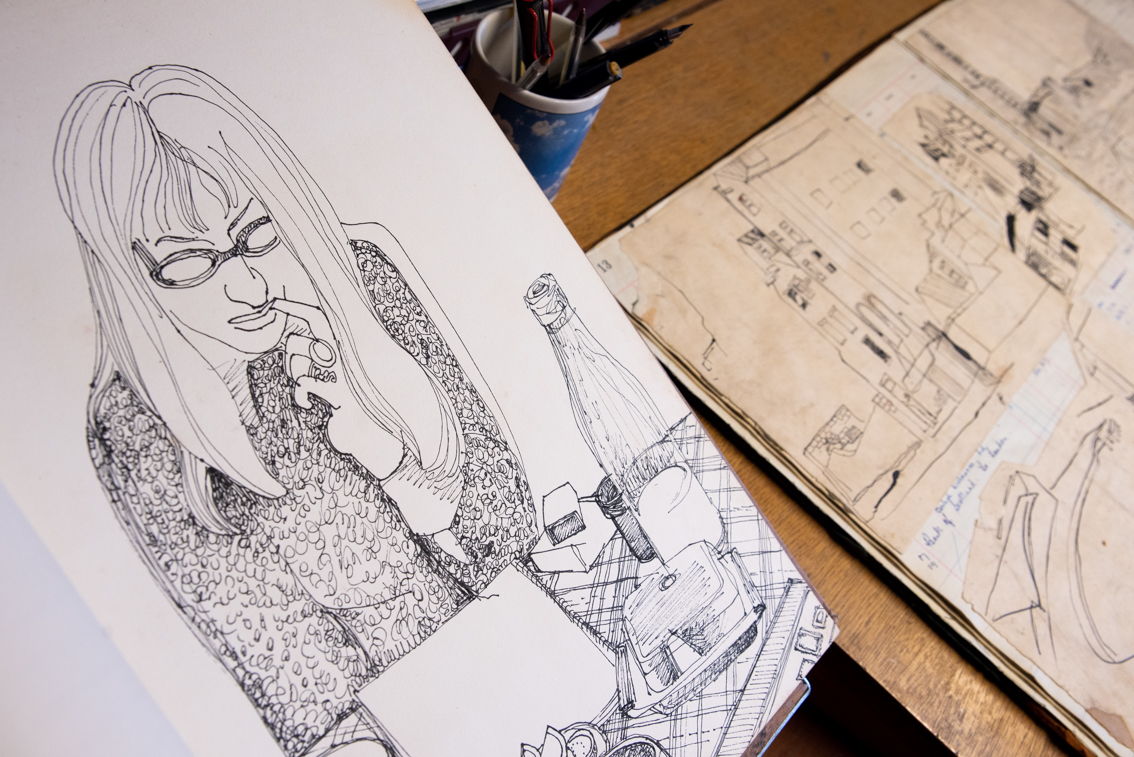 An exciting opportunity to explore new material recently uncovered at The Alasdair Gray Archive that charts the changing cityscape of Glasgow, showing a city in flux. These sketches, artworks and publications show Gray’s relentless interest in fixing the disappearing people and places in the city thats surrounded him.

Also on show will be Gray: Beyond the Horizon, an interactive, multimedia exhibition that invites you to journey through the many pages of Gray’s seminal novel  Lanark: A Life in 4 Books. Written and designed by Rachel Loughran as part of her MLitt (Art Writing) placement from The Glasgow School of Art and produced in collaboration with the Archive.

Hourly tours both days from 10-3pm 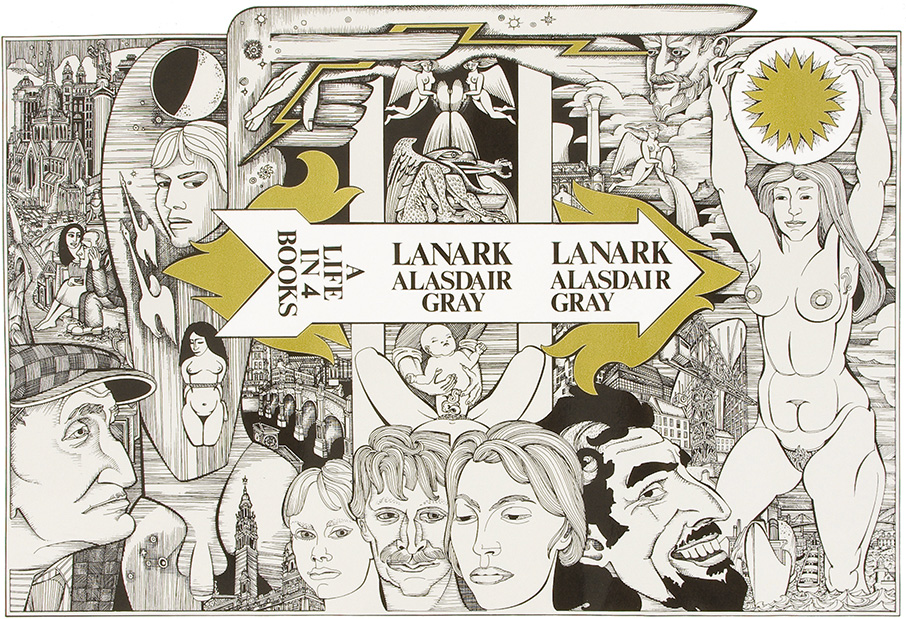 Alasdair Gray's Lanark: A Life Made on Paper

This exhibition marks the 40th anniversary of the publication of Gray’s first novel, Lanark: A Life in Four Books. Published in 1981, it is considered to be one of the greatest masterpieces of 20th-century Scottish literature. The two-room exhibition uncovers how Lanark was made and has been selected from the manuscripts and artworks created by Gray throughout the development of the novel that spanned three decades.

Highlights include the artist’s design for the jacket cover of Lanark and designs for the title pages of the four books. Also featured are just some of the varieties of found, recycled and repurposed sources of paper on which the manuscript was drafted and re-drafted, which include Gray’s personal notes, illustrations and detailed instructions to his typists.

Gray’s work on a larger scale, beyond the images associated with the making of Lanark, is also represented through works such as ‘Blossom and Diane’, ‘The Artist’s Family and Friend’ and his portrait of Scots Makar Edwin Morgan, ‘Portrait of EM (Edwin Morgan) (1920-2010)’.

The manuscripts and artworks that feature in the exhibition were given by Gray to The Hunterian and the University of Glasgow Library, Archives and Special Collections. A selection of other works on paper by Gray, also presented to The Hunterian by the artist, is included. Most of these works have never been exhibited. 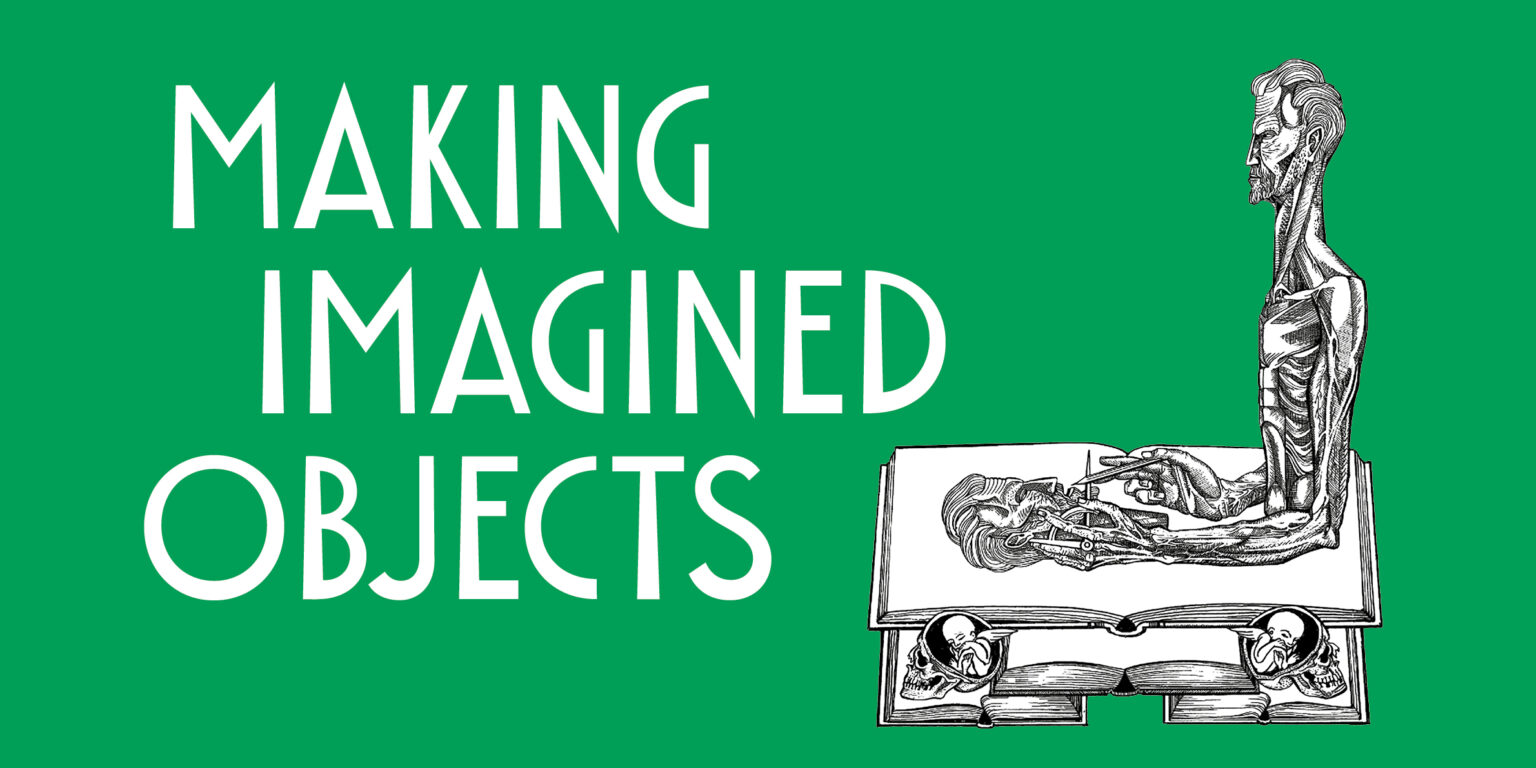 THE 2ND INTERNATIONAL ALASDAIR GRAY conference; Across Space and Form

This two-day interdisciplinary conference will examine the nature, value and legacy of Alasdair Gray’s artistic output, considering his literary work and his visual practice, and the relationship between the two in Gray’s oeuvre. The conference is entitled “Making Imagined Objects” in tribute to Gray’s own repeated and modest claim that he was a “maker of imagined objects”.

This is the second International Alasdair Gray Conference. The first one, convened by Professor Camille Manfredi, took place in Brest in 2012 and resulted in the critical book, Alasdair Gray: Ink for Worlds (Palgrave Macmillan, 2014), which Gray himself contributed to. This second Alasdair Gray Conference, with some of the same organisers involved, intends to be its continuation a decade later, expanding towards an even greater validation of Alasdair Gray’s pluraity of forms. 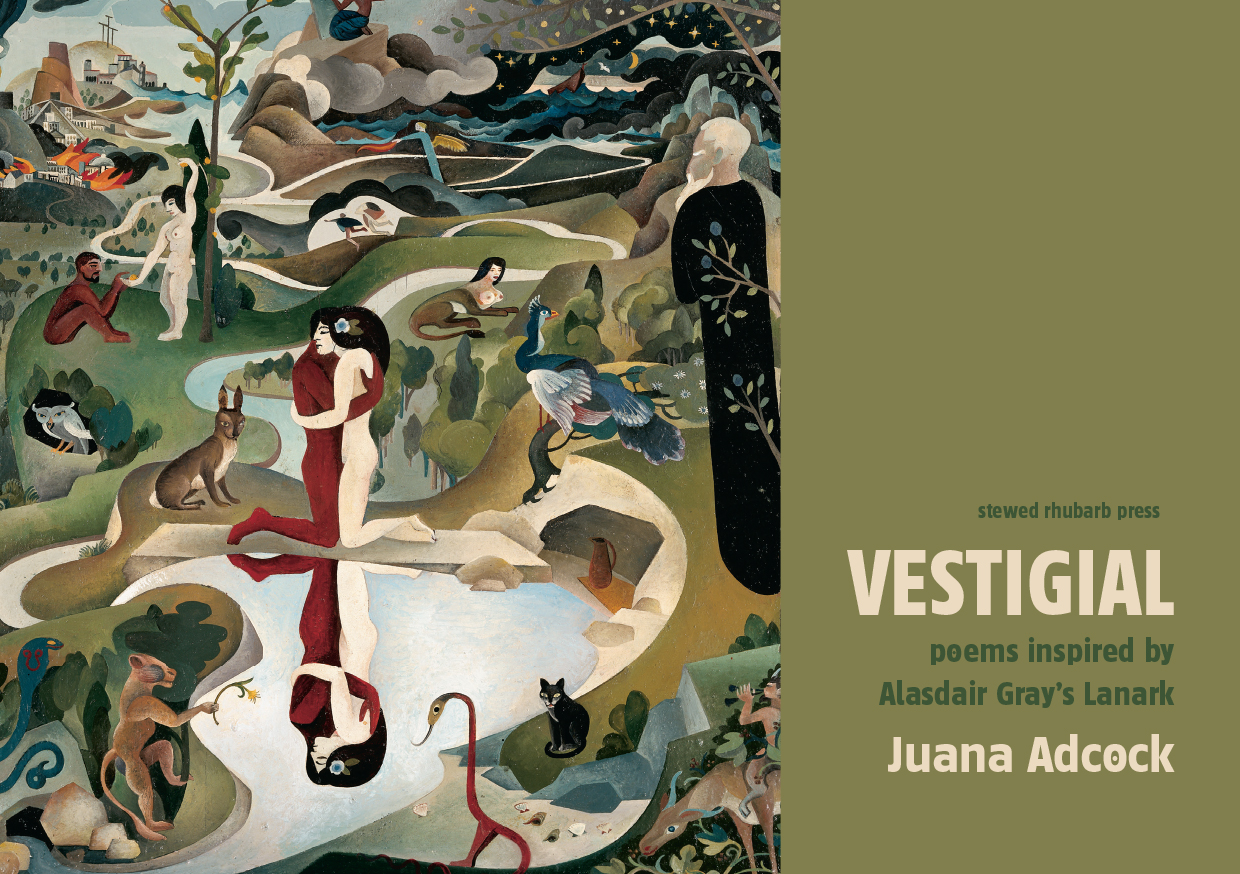 We are delighted to announce the publication of acclaimed poet Juana Adcock’s new chapbook of poems. In 2021 Juana was invited through the Archive’s Creative Commission program with Rodge Glass (English & Creative Writing team, School of Humanities, at Strathclyde University) to write a poem in response to Alasdair Gray’s Lanark, with the support of the Alasdair Gray Archive. The work of this father figure in the renaissance of Scottish literature and art was so expansive that Adcock was inspired to write a series of poems and texts as she approached the multiple facets of the work. The concept of vestigial traces – of loss, identity, memory, human contact and urban life weaves this new work together. The chapbook opens and closes with the image of a silhouette in a window, which comes up in Chapter 2 in Lanark, and draws also from the painting ‘Eden and After’ featuring a snake with legs – hence the title of the pamphlet, Vestigial. It plays with the layout on the page, the remains of cities, genomes, memory, human contact, and with several attempts at writing the same poem, loss and potential. Playing with form and phrase, Juana has taken Alasdair’s work into a conversation about contemporary Scotland. This publication has ben supported by the Keith Wright Memorial Creative Writing fund 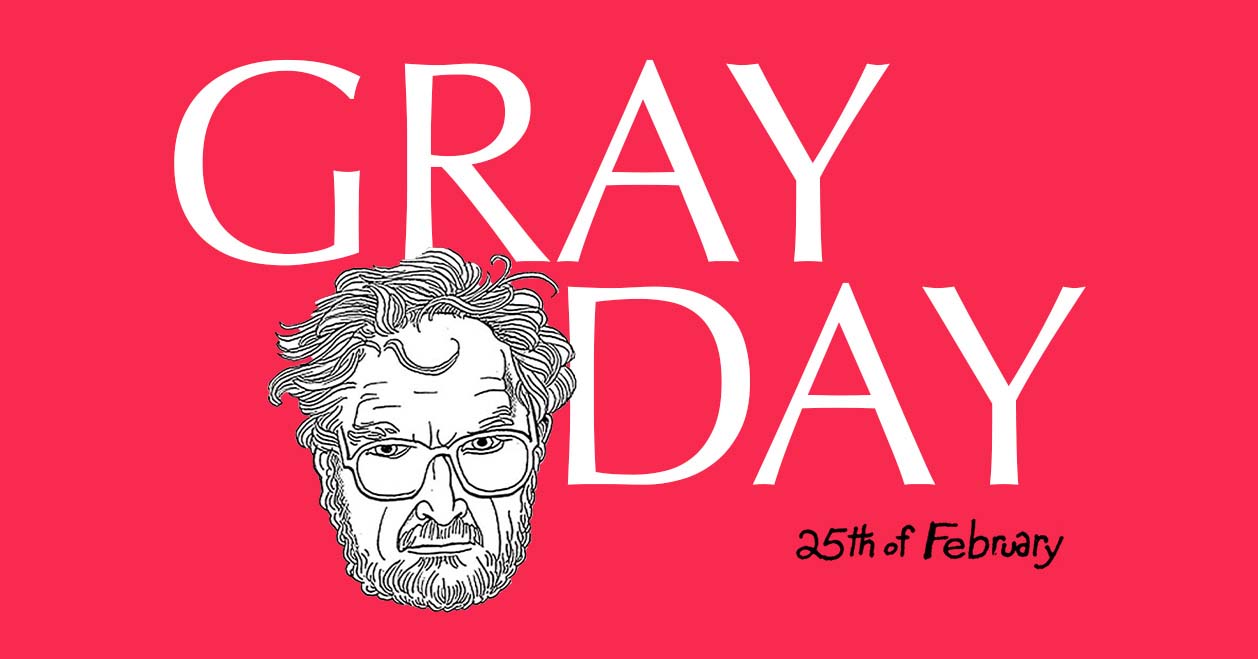 GRAY DAY returns for a second year with a day-long celebration and a live event at Òran Mór featuring readings, film and music

The annual celebration of the late Alasdair Gray sees writers, artists and readers come together on the anniversary of his masterpiece, Lanark

A Live event at Òran Mór
DATE: 25.02.22 | TIME: 19.30-21.30
An evening of performances from and in honour of Gray’s retelling of Dante’s Divine Trilogy
Readings from: Hollie McNish, Val McDermid and Liz Lochhead

+ LIVE MUSIC to be announced

Fret not, the event will also be live streamed for people who can’t attend in person. 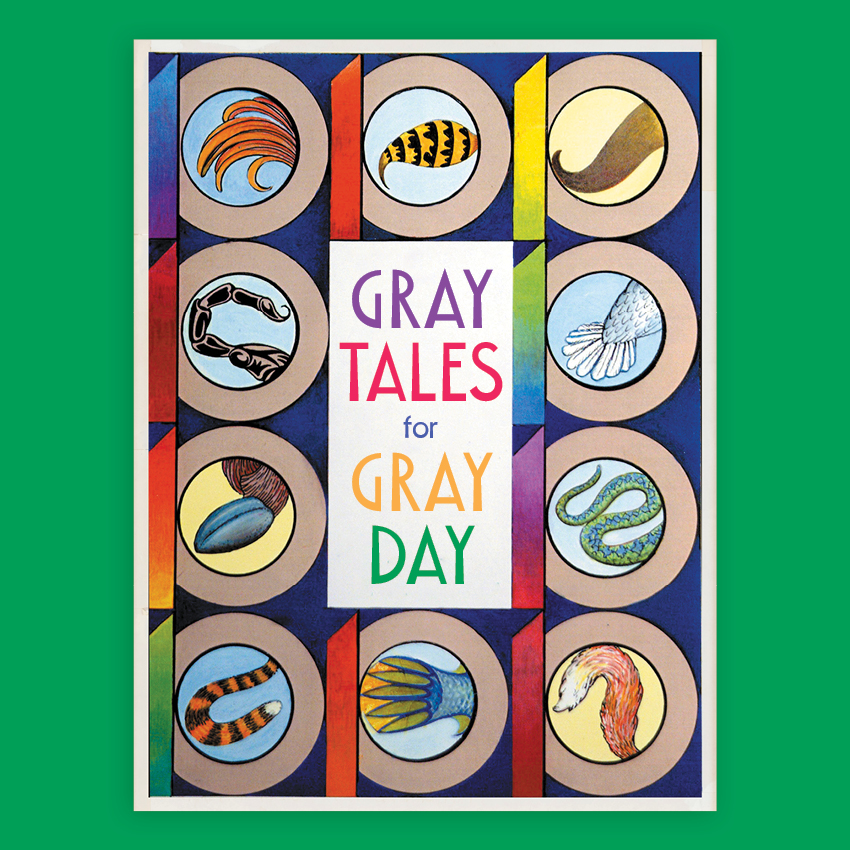 from THE ALASDAIR GRAY ARCHIVE

In the lead up to Gray Day 2022 the Archive will be sharing ‘Ten Tall Gray Tales’ – a series of short films made by Kevin Cameron.

For this series the Archive has invited friends & collaborators of Alasdair (including Liz Lochhead, Bernard MacLaverty and Oran Mor’s Colin Beattie) to share memories prompted by an item in the collection. Kevin was responsible for the 2014 documentary ‘Alasdair Gray: A Life in Progress’ which captured Alasdair over a fifteen-year period working on ambitious artworks and new publications 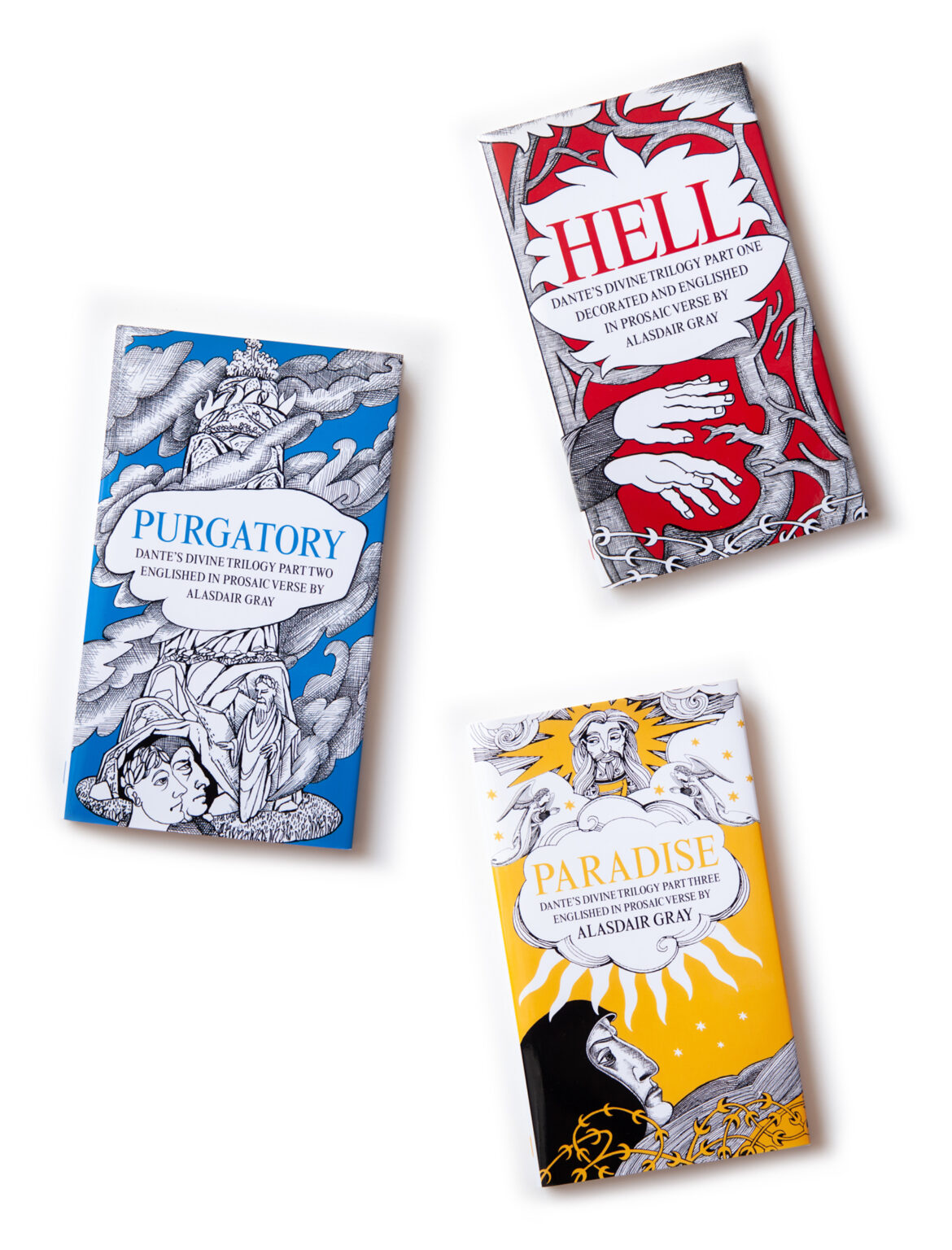 Dante and Alasdair Gray: A Scottish Journey through the Divine Comedy

This symposium was a commemmoration of the 700 years since the death of Dante told through a series of readings, critical and creative responses illuminated the original text and drew links with Alasdair Gray’s recent translation, his last major work before his death in 2019. 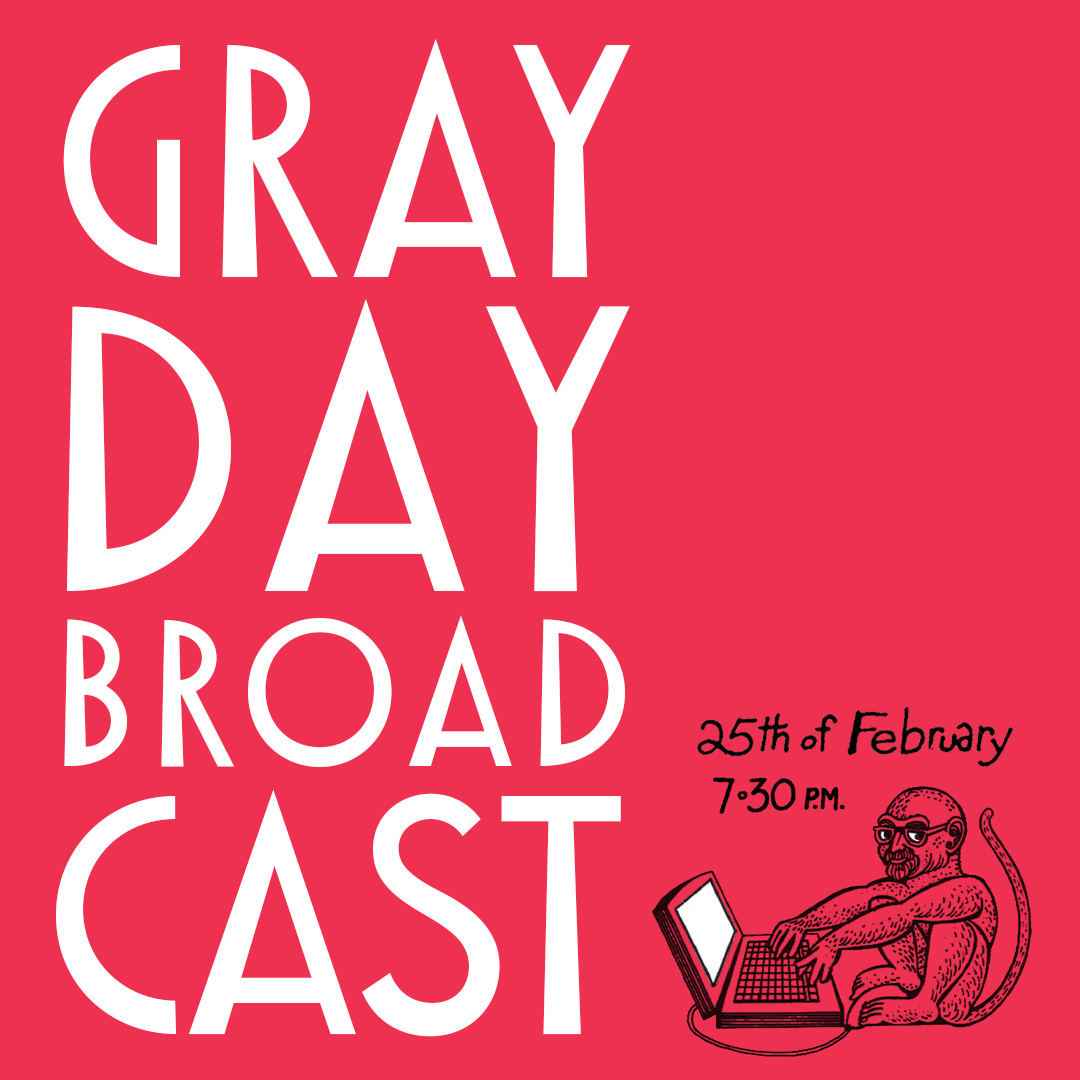 25th February 2021 was the first Gray Day, a celebration of the writer and artist Alasdair Gray, on the 40th anniversary of his masterpiece Lanark. To mark it Canongate published a new hardback edition of Lanark, as well as editions of Unlikely Stories, Mostly, McGrotty and Ludmilla and The Fall of Kelvin Walker.

A special Gray Day Broadcast took place, which you can watch below:

In collaboration with Canongate and Neu Reekie.

The Archive has created a vimeo page to share videos of friends, family and admirers reading their favourite sections from Lanark, viewable here. 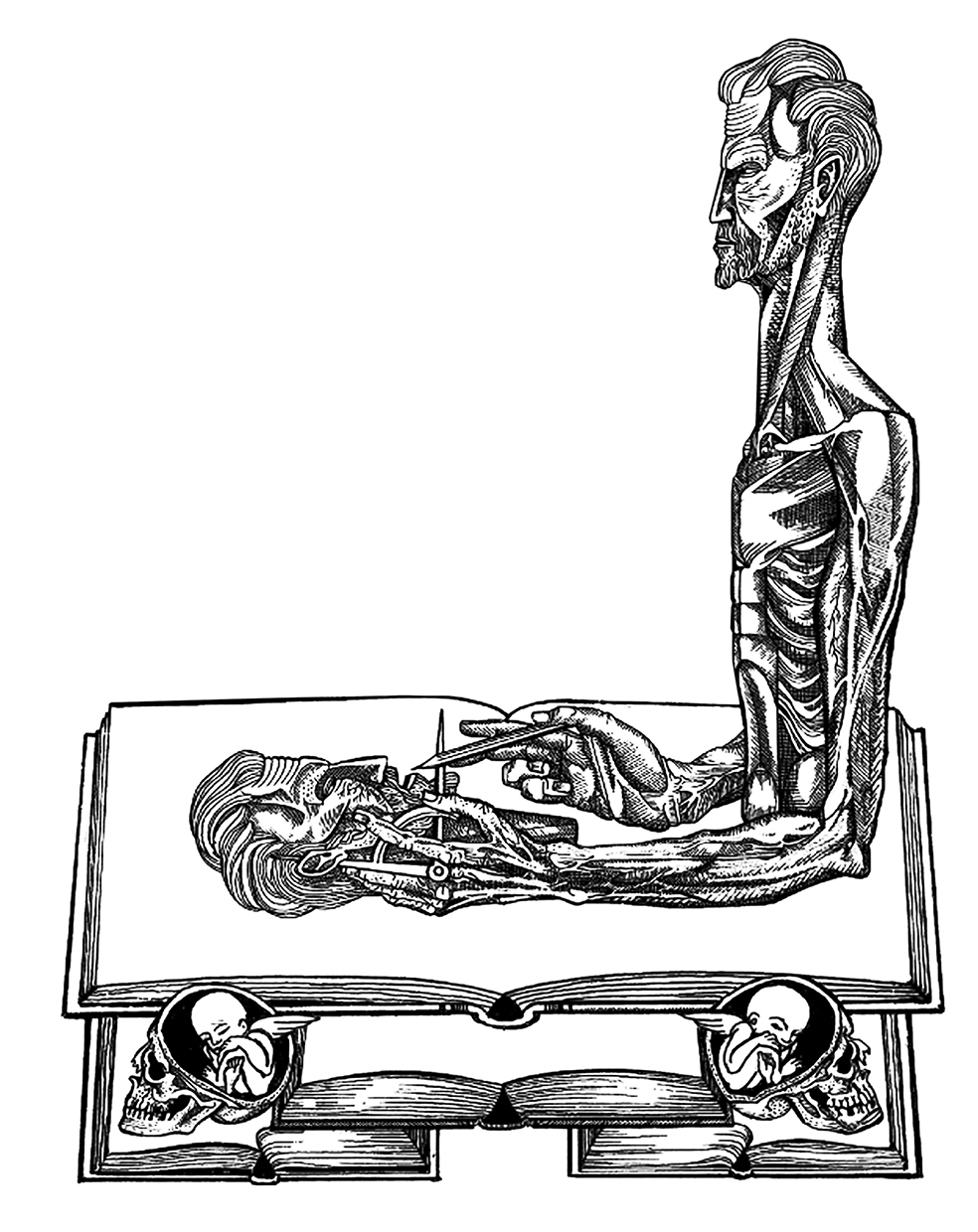 A symposium bringing together leading artists, writers and academics to respond to Gray’s debut novel 40 years after publication 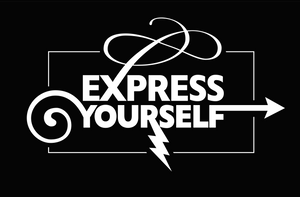 Carla Woodburn, of Express Yourself Podcast, discusses Alasdair Gray as a neglected poet, speaking with the Alasdair Gray Archive, Rodge Glass, senior lecturer in Creative Writing at Strathclyde University, and Alan Riach, professor in Scots Literature from Glasgow University. The show was part of #GrayDay celebrations in Glasgow on the 25th Feb 2021.